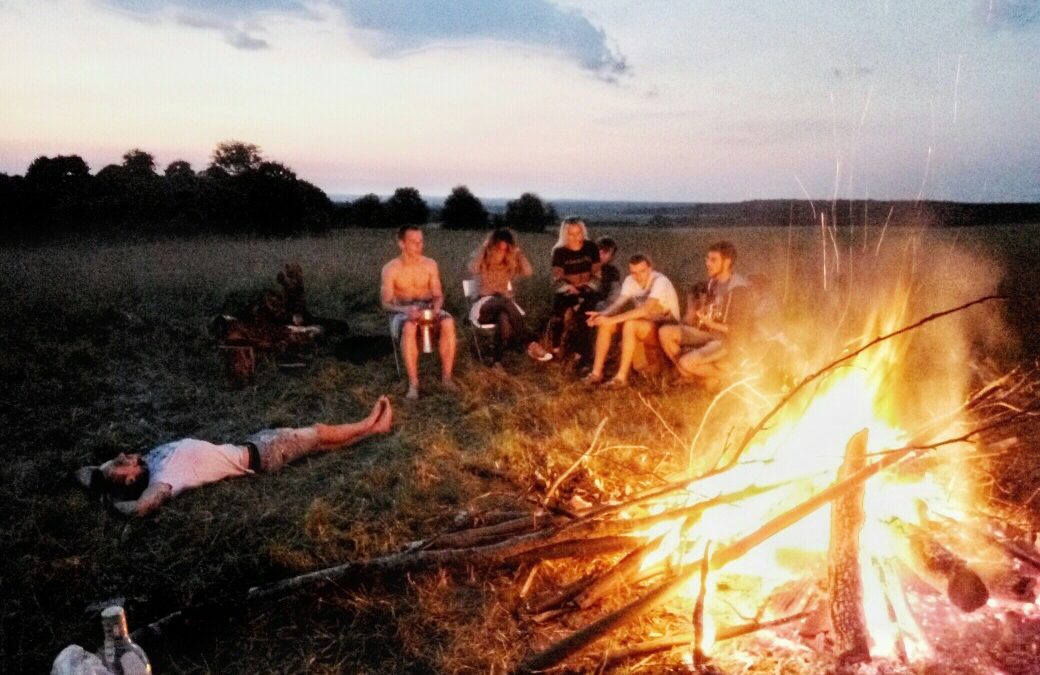 Let’s jump right into today’s topic: outlining novels. This is arguably one of the first steps taken when you’re preparing to finally write that best seller. It’s also one of the most controversial — which is why we’re going to ignore the debates about pantsing versus plotting and talk about campfire writing.

Campfire writing is an outlining process that helps storytellers learn how to both structure and free-write. It’s one of my favorite ways to start a new project, so sit down, drink your coffee, and leave your thoughts when you’re done reading.

I’m the type of person who will start a puzzle by putting all the outside edges together first. When it comes to an outline, I prefer a similar method — creating a frame that I can build inside of. This is simpler than it sounds.

Have you ever sat around a campfire as a kid and told spooky stories? If not, you probably should, fresh air can do wonders (just kidding, who wants to go outside?). Think about it though: instead of a campfire, maybe you were in a coffee shop, telling your BFF your next book idea. Or perhaps you were creating a silly bedtime story to get the kids to go to sleep. Whatever the setting, do you remember how you went about it?

You had a starting place, maybe an ending (others leave that until they get there), and you had a direction you were going. That’s a story frame, right there. Take this example:

“A silly story about a goose and a frog and their adventures in Lake Glitter.”

I’ve just established types of characters, that the story has a light-hearted style, and I’ve given it an adventurous direction. Frame? Check. It doesn’t have to be more complicated then this — just like when you pull out the marshmallows, lower your voice to a husky whisper, and talk about the man with a hook for a hand, you’ve still got an idea to work within. How would you describe your story in just a sentence or two? Mine:

“A heroin-addicted dropout is the hero you expect and get in this grim, dystopian world. It’s no surprise that some rich hunters want to add him to their trophy room. If you think he’ll get his shit together for a happy ending, you better find another story.”

There’s a certain type of writer who wants to write without a frame. They want to just start and see where the story takes them. But even when you do this, you’re outlining — even just in your head. Because you don’t just write an entire novel on a single flash of inspiration, sometimes you stop and think about where to go next, or wonder how to add something in, or you pause to ask what the heck your characters are even doing now.

It’s okay to free-write, especially if it helps you get started. In fact, I think the bulk of your story should be free-writing, but we’ll come back to that in a moment. For now, I want to reiterate: you have a frame, sometimes you just have to put words to what that frame is. Let’s talk about why.

I really, really wanted to free-write forever, I mean, why not? Outlining novels feels so sterile, and I didn’t think it let me focus on what I find most important: characters, their relationships, and their growth. So I free-wrote (with an outline in my head) a six-book series. Neary one million words. At the end? The pride of accomplishment, and the realization that I had no animals, that plotlines wandered around with no real purpose, that I had about a dozen deux ex machina moments, and that my super unique fantasy world was basically earth but with changed names.

Ouch. Maybe you’re better at free-writing then me. Maybe you don’t mind re-writing drafts a few times. Better to have a book that needs fixed than no book at all. But here’s the thing: you can also build a quick frame, save your energy for edits, and still enjoy all perks of free-writing.

How does outlining novels work with free-writing?

Come back to the puzzle analogy with me for a moment. When you build one, do you start at the bottom and find all the pieces in order, one-by-one? If so, I commend you. For me, once I have the frame in place, I like to start finding the easy, big sections — in a book, I like to find the important moments. I like to figure out how it starts, I like to see how the characters act in this setting, I like to figure out what event to push them toward.

Some of that requires me to actually sit and pound keys. When I worked on my fantasy series last, I wrote a chapter from a doctor’s POV, then sat back and realized that it was the perfect way to lead toward an event I’d planned to happen halfway through the series. Last week, a character did something that wasn’t in my plans, and I had to consider how it would change things — because I do believe in letting the story take the reins. That’s the pantser part of me, letting go of my expectations.

But that doesn’t mean giving up on the frame I’d built. The frame exists not to control the story, but to give writers a guide when they start getting lost. Your very own compass — so your characters made some unexpected choices… okay, cool! It’s your job to decide how those choices can be used to still drive them toward a destination. Plus, the more you write, the clearer the big picture becomes!

But I don’t have an ending!

You don’t need to know how your story ends. The edge pieces that make up the frame of the puzzle? That’s not the end. You can have that set up perfectly, but the puzzle isn’t done until every piece is in place.

Let’s say you do know how you want to resolve/end the story — sort of like you kept a specific puzzle piece out of the box to put in last. Guess what? That final piece isn’t the story. It’s not even most of the story. It completes it, sure, but on it’s own, it’s nothing.

So while you free-write, end known or not, keep asking yourself, “How can that chapter I just finished help build the rest of the story? How and where does it fit?” You’ll be surprised at how quickly you learn to make adjustments on the fly to enhance your plot organically with character action and growth.

Outlining Novels is artistic, damn it.

An argument I’ve heard against outlining novels is that it takes away the artistic enjoyment. Okay, sure. If I had a bullet point list with 100 scenes listed in order, and a descriptor on all, I might think so too. Something like that can prevent you from getting in-character and letting the people you created for this world find life. There is such a thing as too much details in advance, after all.

But would you tell a caricature artist not to have a plan when they start sketching someone’s face? Would you say that a song-writer shouldn’t decide if the song is rap or blues until they’re done? Knowing the direction of a story doesn’t diminish the artistry. It’s all about balancing the way you’re outlining novels with the freedom you give yourself to shift paths.

What if you’re writing in a genre that requires different world elements — be it geography or cultural traits and habits? You can plan some of this in advance, sure. That might be part of your frame (I knew the religion I wanted to have for my fantasy series), or you can choose to flesh it out as you go, though I do recommend keeping track of what you added. You can use notepad for this, notebooks, or even something like MythicalUnicorn.

There’s a lot that goes into world-building, but that’s for another post. For now, it’s enough to know that you can make adjustments and you can always go back a few chapters and add in details you might not have thought of.

What came first? The Chicken or the Egg?

So do you outline novels or do you write? It’s a vicious cycle, isn’t it? Do both, that’s my recommendation. Brainstorm your idea, write, adjust your ideas, write. And remember, you’re more than a writer, you’re a storyteller. The world needs more stories.